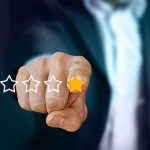 The Tampa Bay Times posted an article featuring Justin Drown in July of 2019. A small portion of the article briefly mentions that Justin Drown “has sparred publicly and privately with South Florida’s Mike Boudet”.

In late August of this year, The Verge posted an article that noted that Obscura had been “inundated with hundreds of one-star reviews on Apple Podcasts.” In the article, the Tampa Bay Times profile on Justin Drown was mentioned. An allegation was made.

This might have pushed Boudet to retaliate in “an attempt to decimate my podcast,” Drown says. He posits that Boudet could have hired an automated service to bombard his show with one-star reviews. Boudet didn’t respond to a request for comment.

The Verge posted a follow up article on September 3, 2019, in which it is reported that Mike Boudet “is threatening legal action against another true crime podcast who claimed Boudet bombarded him with one-star reviews on Apple Podcasts.”

There is a cease and desist letter posted on Scribd, which was posted by Ashley Carman, the writer of both of the articles I mentioned that are on The Verge. The letter is from Lewis & Lin LLC, and is to Justin Drown.

The letter includes the following demands:

While it is possible for Justin Drown to ask The Verge to remove a paragraph from an article, but he has no control over whether or not The Verge chooses to do so. As far as I can tell, this is where things stand. The drama is obviously not over. One potential outcome would bring the term “review bombing” into a courtroom.