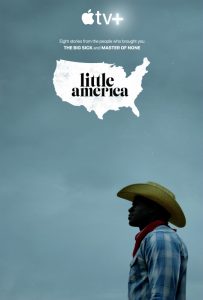 Apple TV+ has a show called “Little America.” It was created by Kumail Nanjani and Emily V. Gordon, the people behind “The Big Sick”, and “Master of None.” It appears that “Little America” might be getting a podcast.

“Little America” features eight half-hour length episodes that focus on a different story each time. It is an anthology series that observes the funny, romantic, heartfelt, inspiring, and surprising stories of immigrants in America. Mac Rumors reported that “Little America” has been renewed for a second season.

Forbes posted an interview with Kumail Nanjani and Emily V. Gordon about the show. The interview also included Lee Eisenberg (who is also involved in the show). Lee Eisenberg discussed what it was like pitching a show to Apple. “They immediately got what we’re going for,” Lee Eisenberg said.

“Apple is such a worldwide and multi-faceted brand. We’re doing a podcast to delve more into the stories and music on the show. There’ll also be a playlist for every episode. We’re putting out a book too. Apple has an infrastructure that just felt like it would be able to touch all of the different pieces that we wanted.”

There hasn’t been any information provided about when, exactly, the “Little America” podcast would debut. It makes perfect sense for Apple, who is well known for Apple Podcasts, to be involved in making a podcast that connects to a show on Apple TV +.