Penguins of Madagascar and the Smallpox Vaccine 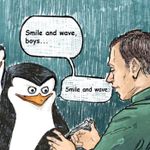 Preorder The Anthropocene Reviewed book, out May 18, 2021: https://sites.prh.com/anthropocenereviewedbook

For every ticket purchased, $2 will be donated to Partners In Health. $1 is included in the ticket price, and my publisher Dutton will match every $1.

The Anthropocene Reviewed book will be released on May 18, 2021 and is available for preorder now.

John Green reviews the board game Monopoly and a high-school nerdfest called the Academic Decathlon.

Staphylococcus Aureus and the Non-Denial Denial

Works of Art by Agnes Martin and Hiroyuki Doi

John Green reviews two works of visual art—a series of six paintings by Agnes Martin called “With My Back to the World,” and an untitled 2003 ink drawing by Hiroyuki Doi.

John Green reviews the Notes app and the strange phenomenon of sports rivalries.

Capacity for Wonder and Sunsets

QWERTY Keyboard and the Kauaʻi ʻōʻō

Prom and the Stanford Marshmallow Experiment

The Hall of Presidents and New Partner

John Green reviews the Hall of Presidents and the song "New Partner" by Palace Music.